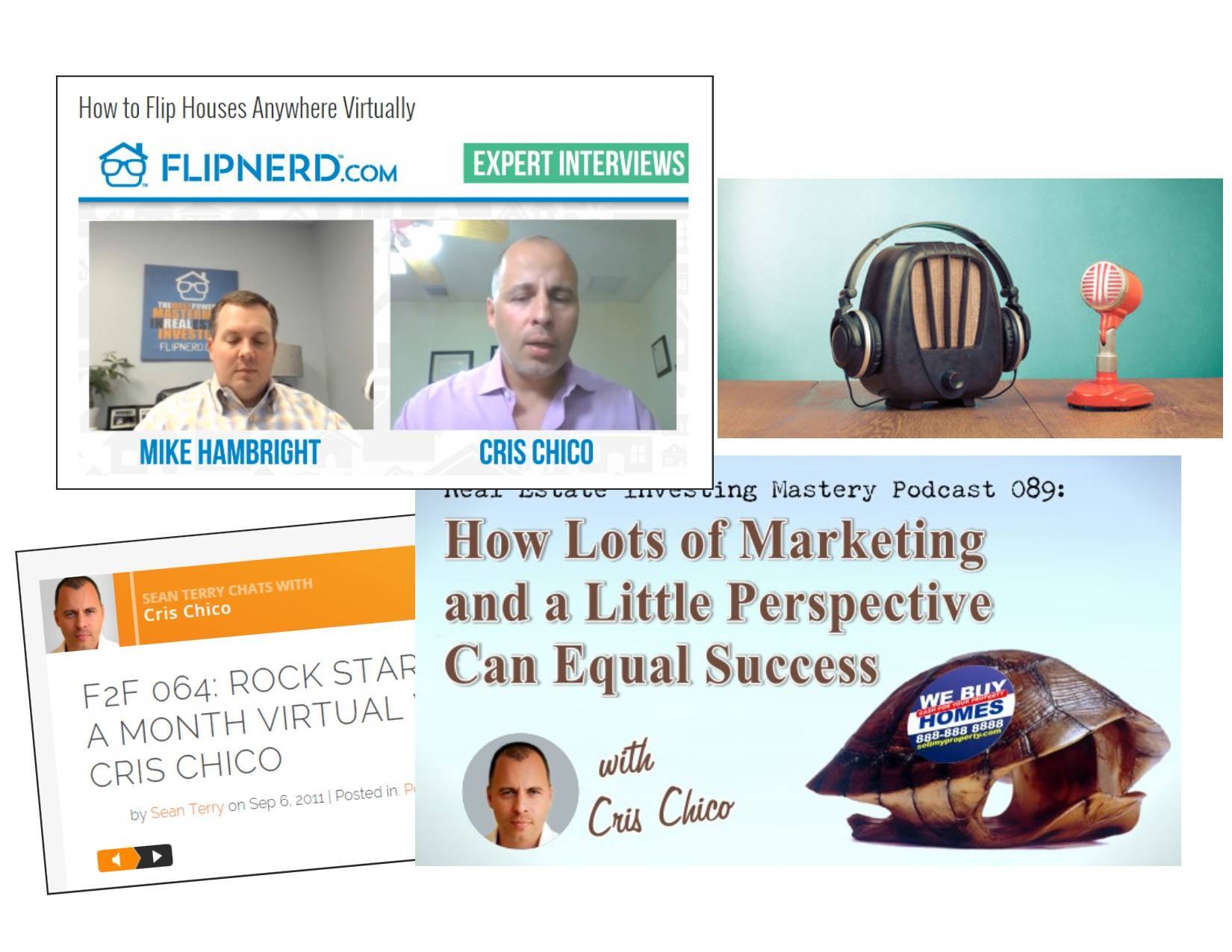 Here are all of my podcast appearances

I've decided at this time NOT to do a podcast show... .

However, here are a few shows where I have been interviewed? 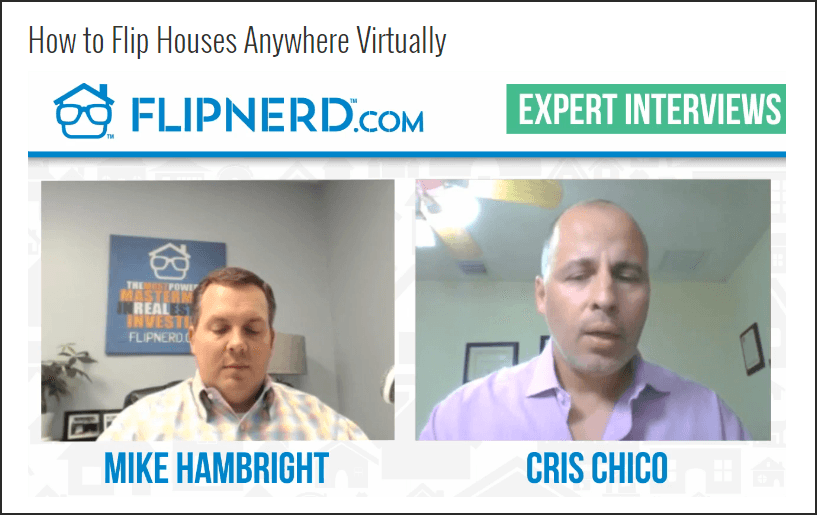 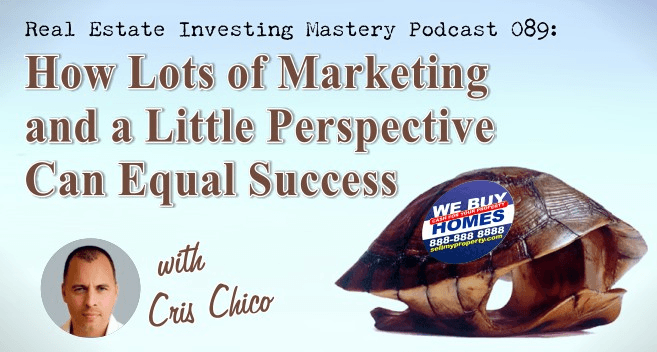 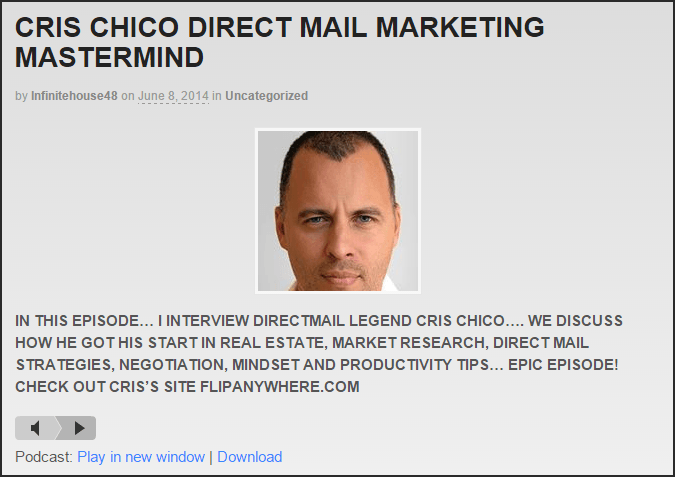 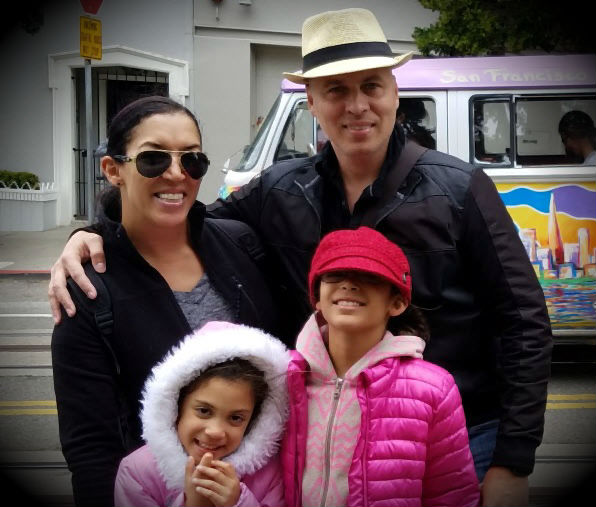 Watch my newest and most up to date training

"I've personally developed the ultimate real estate LIFESTYLE business by flipping houses I've never seen NEVER seen, without ever meeting a buyer or seller, from anywhere in the USA with just a laptop… an internet connection... and a cell phone!" 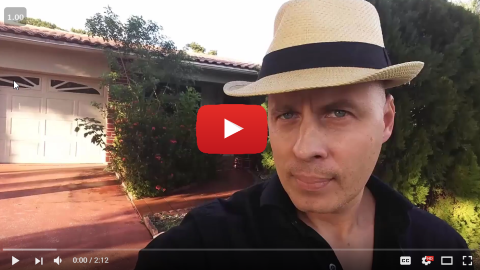 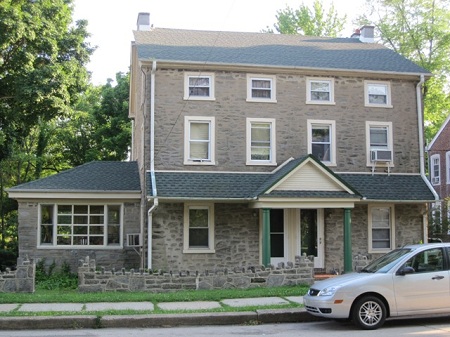 I asked one of my students, Chris Brindamour, to share the results of a recent deal.

He was kind of enough to write up a little case study of the entire transaction including lessons learned:

I sent out a batch of Cris Chico postcards to absentee owners in my local market.

I downloaded the first list wrong, and this seller did not call my 800# until the 3rd round of mailings (3rd time’s a charm).

This seller left me a message saying the property was not for sale but he just inherited a property out of town that he was selling (timing is everything).

So I called the seller to get some information on the property. It turned out it was a 3 family property with two tenants in Philadelphia, and there was a $140k mortgage.

He didn’t know a lot about the property, but he did tell me that he was talking to someone else who was also interested in the property. I told him I would do some research and get back to him.

I tried to do some research using some of the free sites, but for some reason there was no data on this property. So I started thinking that I needed to partner with someone who knew that area and could help me get some comps. I ended up contacting Cris Chico to see if he has a student in the area who might want to partner with me.

I ended up contacting another student and e-mail them the little information that I had, they called me immediately and told me that this was a very desirable area in Philly and was going to take a quick ride by the property and see what he could see. Again, he called me right away and said that this was a great property and we had to lock it up as soon as possible.

We contacted the seller and were told that that he was going to be in town the next week and we could get a look at the property along with the other interested party.

We then started pulling comps, we had a hard time finding a similar property in the area.

Working together we estimate that the after repair value is $435,000 and there is approximately $50k in repairs. We decided we needed to move quick and we prepared an offer that I would present to the buyer the next day, before anyone had a chance to see the property. This would let the seller know we were serious and hopefully give us an edge in the deal.

We decided to present and offer for $150K, unfortunately they did not accept so I asked them what they had in mind and they said not less the $170K. So I called my partner to give him the news and we agree to make another offer when he sees the property. My partner was the first to see the property and the inside was nicer than what we had anticipated. We agree to up the offer to $170K, but told the seller we would like the opportunity to adjust our offer if it was not acceptable.

Now the fun begins. My partner [Cris Chico’s other student whom is helping him on the deal] called me and said he was going to wait around the corner to see what happens with the other interested buyer [there was another buyer that contacted the seller about the deal and we were in competition with them].

He is on the phone with me giving me the play by play, a car pulls up and 3 people get out and go into the property. We exchanged several phone calls, my partner speaks with the owner and he is not sure what to do, this other buyer wants to pay cash on the spot. We go back and forth a few times and finally end up at $205K, which the seller accepted. So our original offer of $150k went up by $55k to $205k.

Now we have work to do, we first decide to list the property at $249k.

My partner immediately blasts the deal out to his buyers list and I send out to a few contacts that I had.

In addition we posted a few ads on Craigslist, Postlets, & V-Flyer.

A week goes by and there are not bites, what to do now.

We decide to resend it out and post it to other sites. We again post it on Craigslist, Postlets, V-Flyer, in addition I blasted it out using ping.fm which sent it to multiple sites as well as posting in on several yahoo groups and Google groups.

All of a sudden the calls start coming in.

We decide to go with the 2nd offer for $250K, since it included a strong deposit and they were willing to sign our agreement, however they wanted 30 days to close (keep in mind it was now 2 weeks since our offer was accepted), we were quickly approaching our deadline of 45 days to close. In addition, this buyer was using a realtor acting as a buyer’s agent and we had a referral fee that we would owe the realtor. Part of the agreement was that the buyer needed to provide “proof of funds” which the buyer did immediately. We’re excited; we are looking at splitting a $45K fee!!!!

The fun begins again, the buyer asks for access for an appraiser. Appraiser, why does he need an appraiser??? This is a cash deal “as-is”. We find out that the buyer is pursuing a mortgage for the property.

My partner and the buyer get into a little argument and he calls me up upset saying that he was not speaking the buyer and that I would have to talk to him.

We agree to draft a letter stating that the contract was in default since the buyer was pursuing a mortgage and to remedy the situation we wanted the entire purchase price escrowed and the closing moved up.

I get a hold of the buyer and we agree that he would pursue the mortgage for a few more days and if that didn’t pan out he would close with his cash. The buyer also states that he will be responding to our letter.

In the mean time we had contacted a back-up buyer in case this deal blew up. Days go by and no word, finally we hear back that the buyer will be closing with cash and no mortgage will be pursued. In the mean time he drafts up a “escrow agreement “for us to sign. The title work was already completed, so we just needed to finalize the documents.

Documents are overnighted to the seller and the closing is set up for the end of the week.

Everything went through fine, and after fees and transfer taxes my share of the fee is $19,750!!! Not bad for my first Cris Chico deal!!!